Learn about the automation execution context (space of variables), its structure, user's location, and how it's appended during execution

An automation execution context ("Context") is a temporary data storage space that Mapsly creates when a workflow, button or schedule is invoked and keeps there the input data, like the record(s) for which a workflow or button was invoked, and data that accumulates over the course of the execution session, including runtime variables.

An automation execution session ("Session") is a process that starts when a workflow, button, schedule, or a form event handler is invoked. Within a Session, Mapsly executes all the required condition/actions blocks, after which the Session completes.

If one of the button's actions is a Form, Mapsly brings up the Form for the user and continues to execute the remaining condition/actions blocks, after which the Session completes, even while the Form stays open. When the user triggers an event on the form for which a handler is defined, for example clicks a form button or changes selection in a picklist field, a new Session is started which completes when all condition/actions blocks of that event handler are executed.

Only a button can bring up a form; forms invoked by a workflow, schedule or a form's event handler are ignored.

During one Session, a button can bring up only one form. All subsequent calls to Form actions are ignored.

Note. You may have multiple Form actions in your condition/actions blocks which are invoked in different branches of your automation logic, but only the first Form action that the execution flow encounters will be executed.

Relationship between Context and Session

When a workflow, button that doesn't bring up a form, or schedule is invoked, the Context that is created when execution begins is destroyed immediately after it completes. So in these cases one Context is created per execution session and it doesn't persist after a session completes.

However, if a button brings up a form, the Context is not destroyed when the button's execution flow completes. Instead, all the form's event handlers are executed within the same Context, which serves as the persistent storage of the form's state and accumulated data between execution of its event handlers.

A Context is a hierarchical JSON-object that looks like this:

Here's the list of typical objects available at its root level:

In any Twig template and Code statement, you may use the Set(param,value) function to add a custom key or JSON-object to the current level of the Context:

This way, you can pass custom data from one action to another, thus joining actions into a complex business process.

To prevent name conflicts between actions, when an action starts, a nested Context object is created with a unique random key that will store the action's variables and resulting data:

You may define a custom name under which the result of an action will be also available, which is useful in cases when you use the same action more than once over the course of one Session. To set a name for an action's Context key, while hovering over the added action's name press the Set button and enter the name:

Once a custom name is set, it will appear this way:

In the Context's record object, as well as every item in the records attay, there are several system fields regardless of the object to which records belong:

Use these fields in actions which can be executed for various objects - to determine this data at runtime.

Here's how it will look in a Create record or Update record action's field list:

When Mapsly starts evaluating every Twig template in your automation elements and Code statements, Mapsly adds all Context keys as read-only Twig variables, so you can access any key from the Context by its name. For example:

In case of a name conflict, the key that is more nested towards the current Context level takes priority.

In Twig, nested keys are properties in the object variable

You may access keys nested in a Context object as properties of an object. For example:

Example of using Context to pass data between actions

Example #1: Displays a message from a variable

Here is how the Show message action "reads" the message and style variables from the Context: 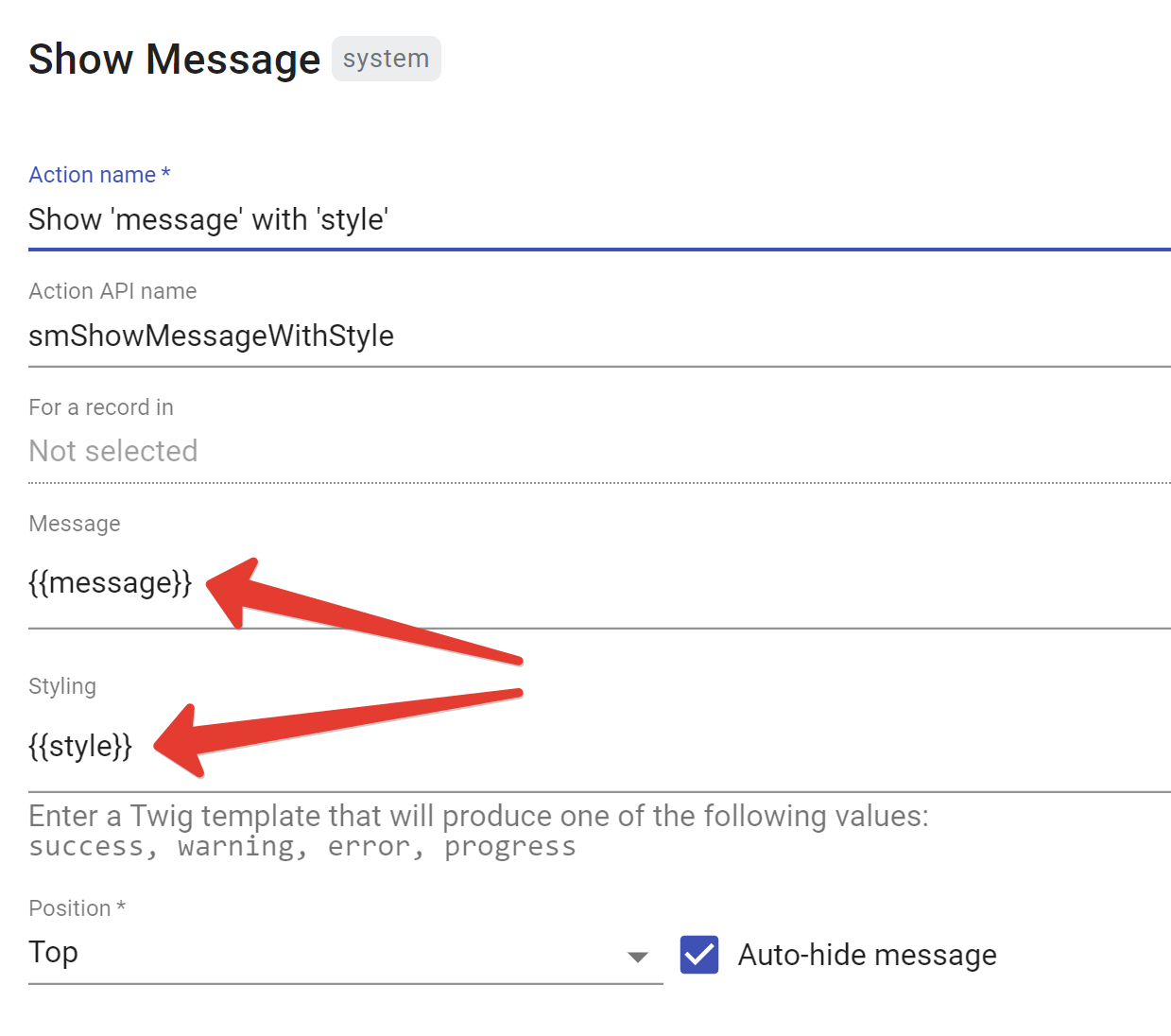 The content in the Message and Styling fields are simple Twig templates that read values from the message and style variables.

Example #2: Save the check-in distance to check-in record

In this example, we'll take a look at the out-of-the-box check-in button: when a user clicks the Check In button, Mapsly calculates how far away the user is from the location they're checking into, brings up a check-in form, and then stores this distance along with the verified flag to the check-in record. (The distance is calculated before a form is brought up to make it easier for the Mapsly admin to modify the process to prevent the user from checking in if they're too far away from the location.)

Here's the System Check In button: 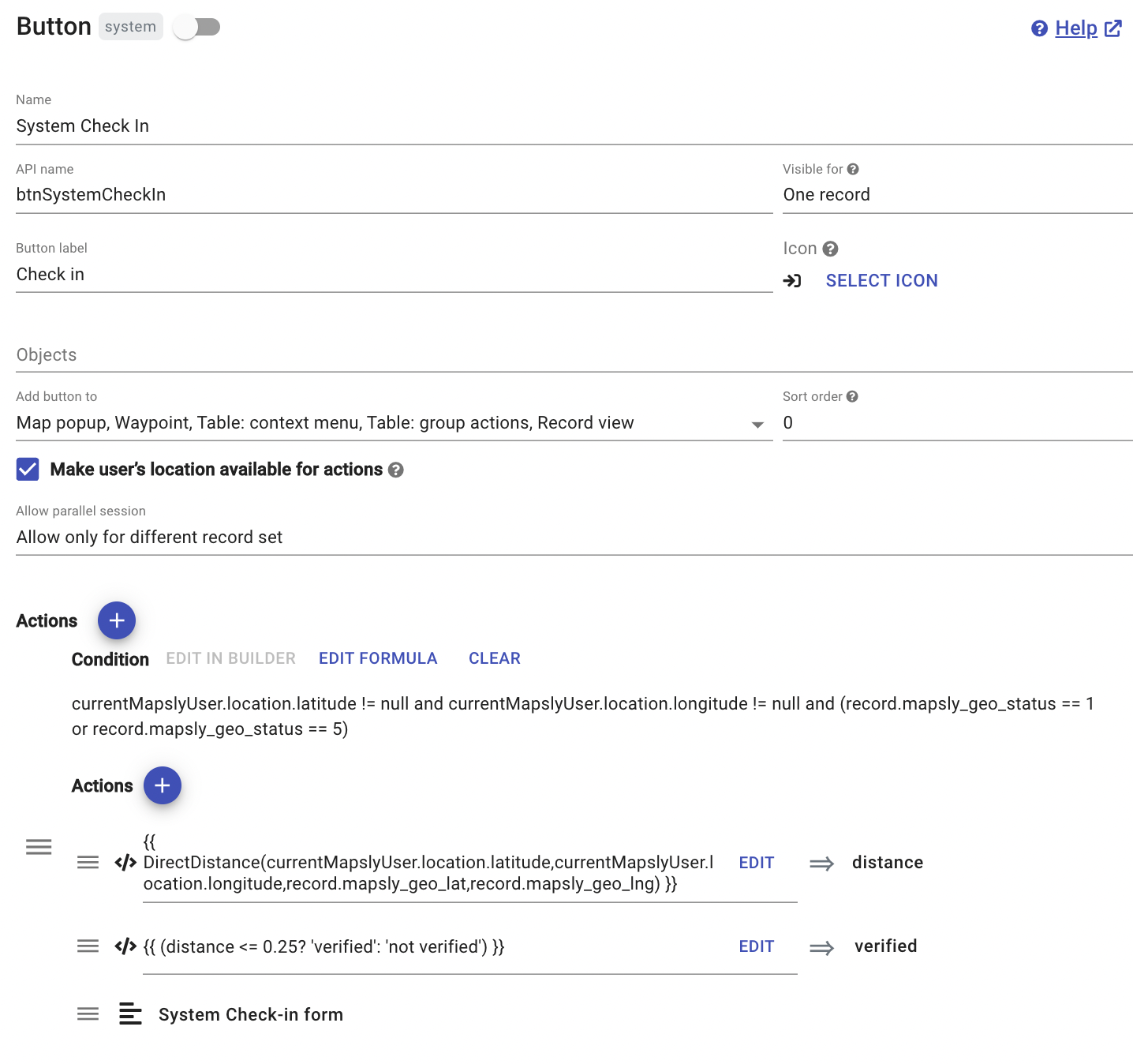 Then brings up the System Check-in form form.

The OnClick handler of the form's Check In button calls the Create System Check-in record action, which saves the values from distance and verified into the check-in record's fields: 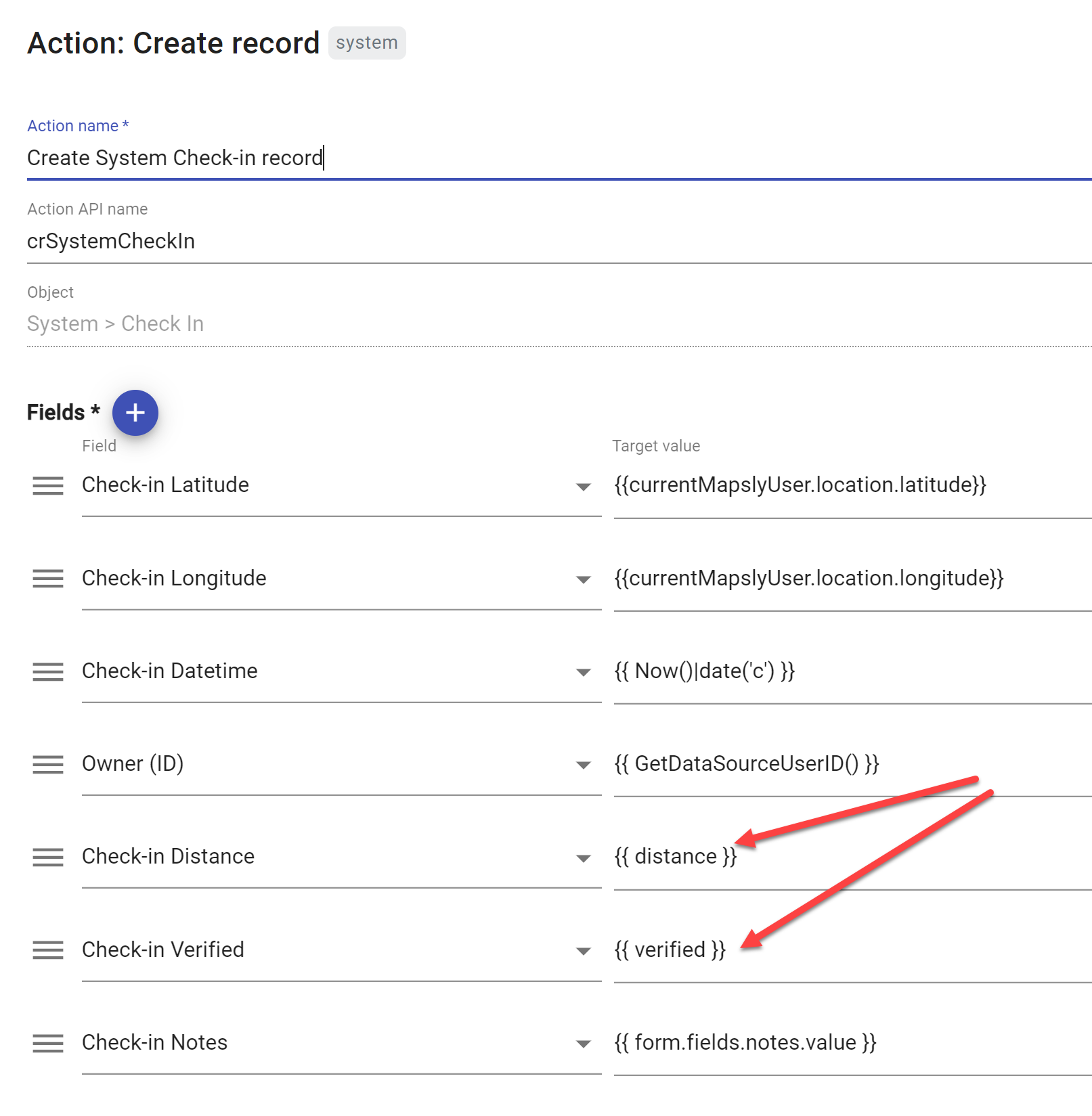 You may view the content of the Context for every individual Session in the Execution logs section:

Please note that to see the Context, you need to have detailed logs enabled.