This article covers the concept of forms and how everything related to forms work. The Form builder tool is described in this article.

A Form is an action that can be added to a Button's condition/actions blocks that brings up a form with fields configured by the Mapsly administrator using the Form builder, to gather data from a user and execute further actions.

If the Button that brought up the Form was clicked for certain record(s), the Form will have access to these records through the Context as well.

To use data entered into a Form, add actions to form event handler.

A Form has a body and the line of action buttons at the bottom.

You may add any available fields to the Form's body.

You may add a button both to the form's body and to the line of actions buttons, and add actions to their OnClick event handler - these actions will be executed when the button is clicked.

Use form.close Context key to close Form or prevent it from closing at runtime

Available form elements and their properties

You may add the following types of fields to a Form's body:

All fields have a visible name and the API name that you may use in the event handlers to access fields' data.

All fields except buttons also have optional description and the current value, both of which can be set to particular values when the Form is designed, or be defined with Twig templates that will be resolved when the Form is loaded.

A Picklist field also has a list of picklist items in its properties, which can also be either set to fixed values when the Form is designed or be defined by a Twig templated that will be resolved when the Form is loaded.

A File field also has the following additional parameters:

See the Working with files section below to learn more about uploading, viewing and accessing files in Mapsly.

Form events, their handlers and accessing the Form's data

OnClick events are supported only for buttons.

OnChange events are supported only for Date, Picklists and Checkboxes (but not for Text and Number fields).

As described in detail in the article about Contexts and Sessions, the execution session of the Button that brought up the Form continues to execute after the Form opens and completes without waiting for user's actions on the Form. And each time a form event handler is executed, Mapsly spawns a new execution session that use the same Context that was created when the Button was clicked.

All these sessions will appear as a separate sessions in the Execution log.

For example, if a user clicked a Button, then twice changed the value of a picklist with the OnChange handler and then pressed the Check In form button, you will see 4 separate sessions in the Execution log.

When a form event happens for which the handler contains condition/actions block(s), Mapsly saves the current state of the form and its fields including their current values under the form object in the Form action's context with the fields' properties stored in keys with their respective API names: 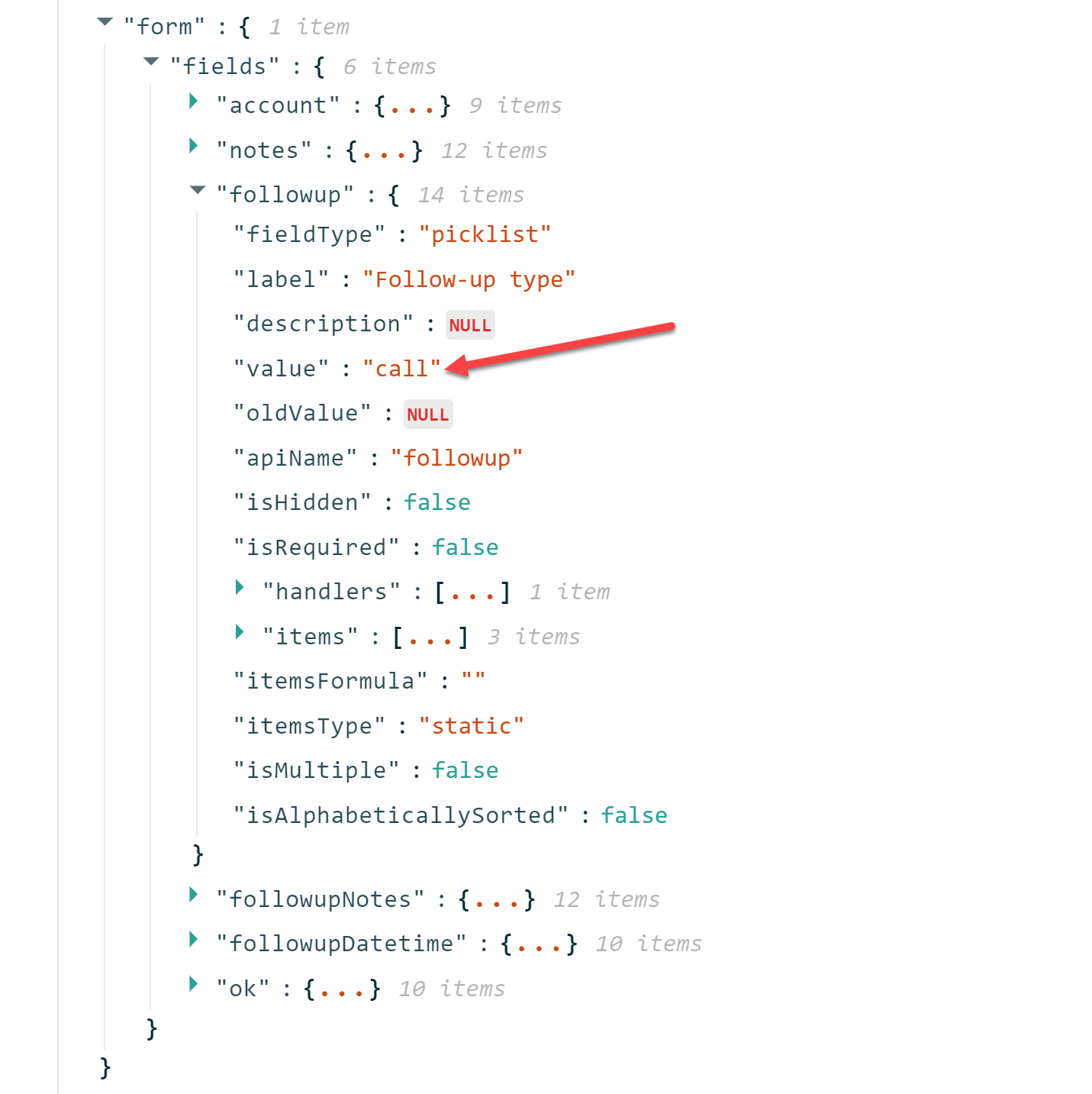 In the example above, the current value of the picklist field with the API name followup can be accessed as

form.fields.followup.value; and the current Notes - the value of the Text field with the API name notes - can be accessed as

Also, in case of the OnChange event, the new and the old values of the field that was changed are saved in oldValue and newValue keys in the Forms' context:

So, for example, in the followup's OnChange event you can access:

You can show or hide form fields and change their current value, as well as a picklist's items, by calling an Update form action in form event handlers.

If necessary, the same Update form action can be used with different forms as long as it all the field API names if references are present in all those forms.